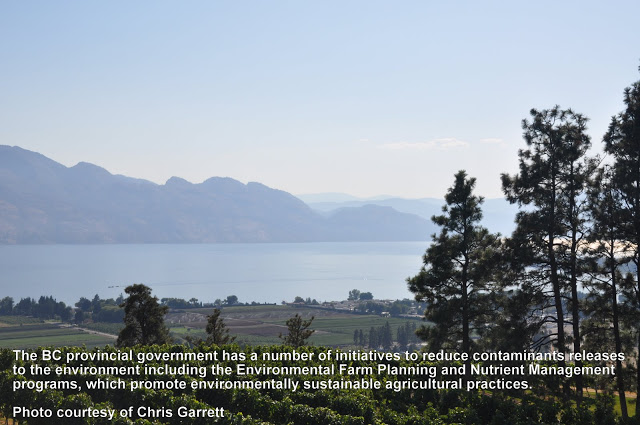 BC provincial ministries conduct programs and utilize provincial legislation to control the release of contaminants to the environment.

The BC Ministry of Environment (BC MOE) is responsible for managing the release of wastes and other contaminants from the industrial and agricultural sectors, with the exception of waste discharges to the air in the Metro Vancouver area, which is under the jurisdiction of Metro Vancouver. The pertinent provincial legislation is the Environmental Management Act (EMA), which controls the handling, disposal and release of wastes from industrial, provincial and municipal sources.

Other BC MOE activities and programs relating to contaminants include contaminated sites/land remediation, air quality, hazardous waste, industrial waste, municipal waste, agriculture, product stewardship/recycling, and water quality. BC MOE initiatives on non-point sources of contaminants to the environment include an Action Plan for tackling non-point source water pollution in BC and the development of a stormwater planning guidebook as a tool for local governments to use in planning early actions to prevent adverse effects resulting from the release of stormwater.

Until 2010, the provincial government had the lead role in managing and regulating the finfish and shellfish aquaculture industry in BC.  The province still maintains an active role by licensing marine plant cultivation and issuing tenures for operations on Crown land; issuing business licences under the Fisheries Act; and promoting sustainable aquaculture development. However, the responsibility for regulating the aquaculture industry was transferred to the federal government in 2010 and Fisheries and Oceans Canada now administers the Pacific Aquaculture Regulations under the authority of the Fisheries Act. However, the discharge of waste from land-based aquaculture facilities is regulated under the provincial EMA’s Land-based Finfish Waste Control Regulations.

BC MOE manages pesticides under the Integrated Pest Management Act (IPMA). Under this Act and regulation, the BC MOE sets conditions for the sale and use of pesticides through a pesticide classification system. The Act contains regulatory provisions and standards for these licences, certifications, permits, pest management plans, pesticide use notices, and pesticide use notice confirmations. It also specifies reporting, monitoring, and enforcement requirements. BC provincial government programs promote environmentally sustainable agricultural practices including Environmental Farm Planning and Nutrient Management and provides information on Pest Management and the safe use of pesticides.

The Mines Act, which is administered by the BC Ministry of Energy, Mines and Petroleum Resources, regulates the operation, health and safety of all BC mines. The regulations and orders under this Act prescribe most aspects of mine design and operation, like the stability of mine openings, dams and enclosures, and the prevention of pollution such as from acid rock drainage or acid rock drainage (ARD). Metal-contaminated acid rock drainage has been the biggest contaminants-related concern associated with metal mining in BC. However, requirements under the Mines Act prevent and/or ensure polluter funding to remediate acid rock drainage pollution at BC mines in the future. This Act requires all mines to have bonds or letters of credit sufficient to ensure reclamation of the mined lands. The most recognized site of ARD is the Britannia Mine on Howe Sound. The authority for the regulation of these discharges lies with BC MOE under the authority of the EMA. The Government of BC Britannia Mine website provides a history of this site and a summary of remediation activities.