While many of the old challenges remain, and new challenges continue to be identified, significant reductions in contaminant releases to the Georgia Basin have been achieved as a result of the implementation of both regulatory controls and voluntary actions. 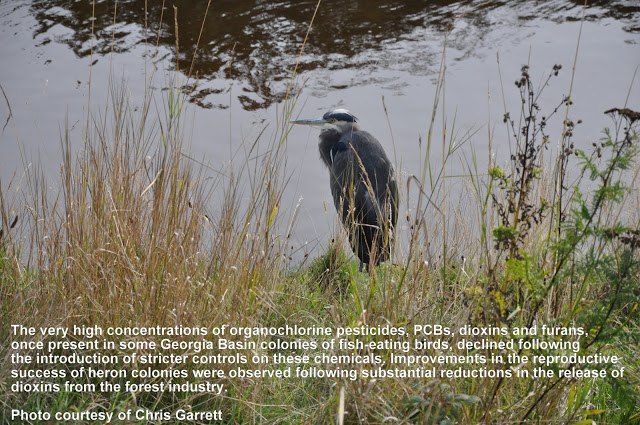 Examples of success stories in the Georgia Basin include reductions in both dioxin and furan releases from pulp and paper mills and the concentrations of these chemicals in the receiving environment; reductions in wood preservative and antisapstain chemical releases from wood treatment facilities; decreasing trends in the concentrations of several priority contaminants in the BC coastal environment; decreased concentrations of POPs in herons, osprey and cormorants and increased reproductive success in some species; and the successful remediation of a large number of contaminated sites on the BC coast. These successes were achieved through the introduction of more comprehensive pollution control measures which combined strengthened government legislation with effective voluntary actions by industry (Garrett 2010).

In addition, while runoff in both urban and agricultural areas has been identified as an important source of contaminants to Georgia Basin waterways, many BC communities are successfully employing low impact development strategies to reduce these releases. Innovative methods of stormwater/rainwater management and land development have been successfully utilized in the Capital Regional District, Metro Vancouver, and in a number of other BC communities. Substantial reductions in both the concentrations of contaminants in stormwater and the volume of stormwater released to local waterways have been achieved.

There have also been a number of successful initiatives to address agricultural sources of contaminants to the environment. Key programs to promote environmentally sustainable agricultural practices are the Canada-British Columbia Environmental Farm Plan (EFP) and the Beneficial Management Practices Programs, which are conducted under a partnership between Agriculture and Agri-food Canada (AAFC), the BC Ministry of Agriculture and Lands (BC MAL), and the BC Agriculture Research and Development Corporation (ARDCorp). EFP success stories have been summarized in a brochure prepared under the Environmental Farm Plan Program.

Additional information on partnership-based initiatives which have been successful in reducing the release and impact of contaminants in the Georgia Basin environment are summarized in another section of this website titled “What is being done – Partnerships and Community Initiatives“.

Success stories such as these demonstrate that initiatives by government, industry, environmental non-government organizations, community groups, and individuals can all contribute to substantial decreases in the release of contaminants to the environment and reduce the risk of adverse impacts on both human and environmental health in the Georgia Basin.

More information on these and other success stories: