Government agencies, industry and non-government groups continue to look for solutions to a number of contaminants-related issues in the Georgia Basin. At the same time, new and emerging issues continue to be identified. 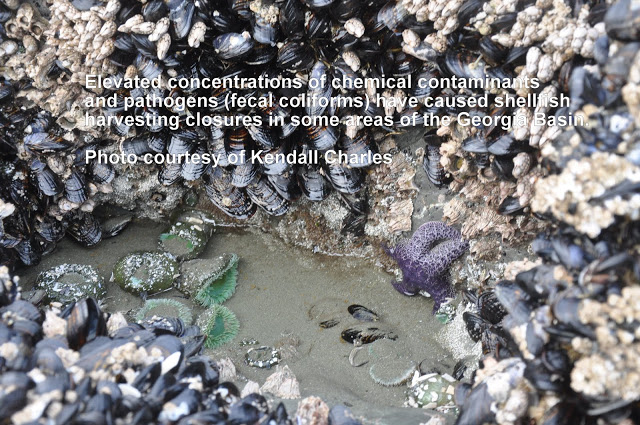 Some long-standing issues in the Georgia Basin continue to pose risks to ecosystem and/or human health in the Georgia Basin. These include the widespread closures of shellfish harvesting areas, primarily due to fecal coliform contamination; nutrient and/or arsenic contamination of some aquifers; the continued presence of chemicals known to pose risks to environmental and/or human health, such as legacy POPs (including PCBs, organochlorine pesticides, and dioxins and furans); and air quality. In addition, our understanding of the potential risks associated with new and emerging POPs and other contaminants in the Georgia Basin (including endocrine-disrupting substances (EDSs), PBDEs, PPCPs, and bisphenol A) is limited.

The presence of legacy POPs present a continued risk to aquatic species, especially to some populations of marine mammals. Conventional and new POPs have been detected in harbour seals, otters, porpoises, dolphins and killer whales in the Strait of Georgia and in Puget Sound (Addison and Ross 2000; Burlinson 1991; Cullon et al. 2005; Hickie et al. 2007; Jarman et al. 1996; Rayne et al. 2004). Despite the stringent controls on PCB and DDT, these chemicals are still present in prey species of harbour seals at higher concentrations than are any other contaminants (Cullon et al. 2005). PCB levels in otters from Victoria Harbour may be high enough to cause adverse impacts on reproduction (Elliott and Wilson 2003; Elliott et al. 2008) and Ross (2006) reported that levels in resident and transient killer whales from BC coastal waters place them among the most contaminated marine mammals in the world. Similarly, the high concentrations of contaminants such as PCBs, organochlorine pesticides, dioxins, furans and mercury detected in several species of birds in the Georgia Basin (including cormorants, herons, ospreys, and raptors, such as bald eagles) may have resulted in health impacts in these species (Elliott et al. 2003a; Elliott 2011; Weech et al. 2003; Wilson et al. 1996; Wilson et al. 1999). However, concentrations in these species have significantly declined since the introduction of more stringent controls on the release of these contaminants.

More information on issues and concerns: