The Georgia Basin, or the Salish Sea, is home to a rich diversity of plant and animal species. From sponge reefs to charismatic killer whales (Orcinus orca), the inland marine waters within the Georgia Basin is important habitat for over 3,000 species of fish, marine mammals, and birds. 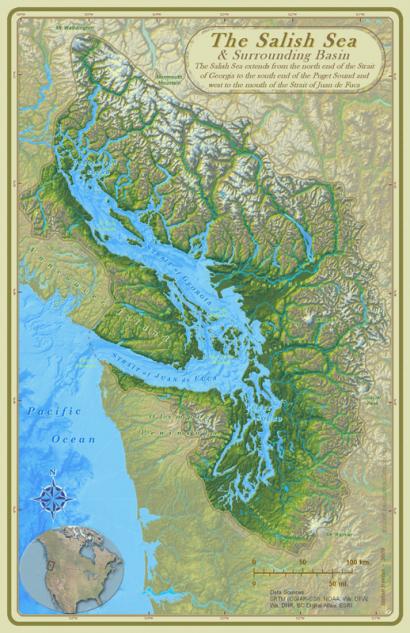 The transboundary waters of Georgia Basin and Puget Sound were the traditional territory of the Coast Salish Peoples of the south coast of British Columbia and the north coast of Washington State. In recognition of this fact, these waters have recently been named the Salish Sea. In the United States, this designation was accepted for the Puget Sound in 2009. In 2010, the Canadian waters of the Strait of Juan de Fuca and the Strait of Georgia were officially included. This important coastal waterway extends from Desolation Sound, at the north end of the Strait of Georgia in British Columbia, to the Oakland Bay at the south end of Puget Sound in Washington State. Although the names of the individual water bodies remain unchanged, the entire area is now officially recognized as the Salish Sea. In this Atlas, Georgia Basin will be used to indicate the Canadian portions of the Salish Sea.

In addition to the rich abundance and diversity of life that characterizes the transboundary marine waters of this region, the adjacent terrestrial and freshwater environment is also home to a myriad of species. These species range from the highly endangered Vancouver Island marmot (Marmota vancouverensis) to the minute freshwater Nooksack dace (Rhinichthys sp). And bridging terrestrial and marine environments are those species that rely on both for different aspects of their life history, such as salmon, seabirds, and grizzly bears. What makes the Georgia Basin home to these species is the rich blend of climatological, topographical, and biogeographical features, and the associated diversity of plant and animal assemblages. Simply put, the Georgia Basin is a special place, and we know it. Because of our affinity for this part of Canada, human population growth presents a challenge to the habitat of the other species that share the Georgia Basin. As of 2005, the Georgia Basin was home to over three million humans.

While many people care about the environment, our activities on land and at sea are exerting their toll. Industrial-scale logging, mining, and agriculture have impacted pristine watersheds and released metals and other pollutants used or produced in these sectors. Urban development has altered drainage patterns and released contaminants associated with household waste, automobile traffic, and commercial activities on land. Industrial plants release large volumes of waste water, often containing harmful chemicals. At-sea activities related to shipping, cruise ships, military vessels and recreational craft have released on-board sewage, hydrocarbons and antifoulant paints.

The Georgia Basin is at the receiving end of thousands of intentionally and unintentionally released chemicals. Each of these chemicals has different properties related to its persistence, solubility in water, and toxicity to animals. Understanding the source, transport, fate, and toxicity characteristics of these contaminants is key to effective and responsible management and stewardship of this important place. Knowledge is a start and this Atlas is intended to provide the user with a comprehensive resource on contaminant issues, datasets, and publications, as well as a GIS-based mapping tool.